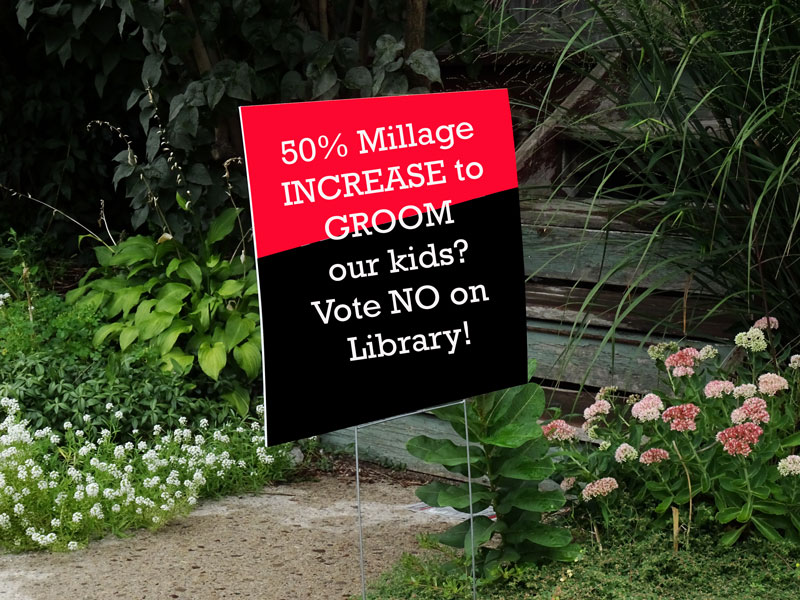 August 4th, 2022, marked the beginning of the end for the small-minded holier-than-thou 62 percent living in Jamestown Township/Hudsonville, Michigan.

The largely toothless, ignorant mass came together to strike down a millage tax proposal that would have supported a local library. Why? Because the library had a single LGBTQ-themed book on its shelves.

A fist-bumping, high-fiving throng of sleeveless flannel shirt-wearing revelers had assembled outside the Reformed Church of America to celebrate their victory over free speech. It was here that I found a likely candidate to interview.

Wearing cutoff denim shorts, the requisite flannel shirt, and a red baseball cap emblazoned with “Guns & Bullits Equals Freedom,” he introduced himself as Peter P. Johnson – but I could call him P.J. – and said he was a life-long resident of Hudsonville.

As we talked, he pumped his sign reading, “50% millage increase to GROOM our kids? Vote NO on Library!”

“People, they gonna be movin’ right here to little ole’ Hudsonville in droves. We gonna have us a real estate boom like you ain’t never seen. I’m thinkin’ ‘bout investin’ in some mo-bile homes. Bound to be folks a comin’ that appreciate that economical kinda livin’.

“Because we’re cleaning up this here town, that’s why; gettin’ rid all-a them fag lovers.”

I asked him to explain.

“People from fer ‘n wide been a searchin’ for a place to live where they ain’t gotta worry about they kids gettin’ haircuts from no fairy-godmother.” Johnson spit tobacco juice into a Coke can he was holding and winked, “If ya knows what I mean.”

I didn’t, but he continued after noticing my quizzical expression.

“Right here,” he shouted, tapping a tobacco-stained finger on his sign, “like the sign says, we ain’t gonna pay no more taxes just so’s them damn LBJ Cuties can GROOM our kids.”

I took a chance, “I think that proposed tax was to support the library, which apparently has LGBTQ books on its shelves.”

P.J. looked at me like I was from outer space.

“No, no, no, ya damn fool. Ain’t nobody give a rip ‘bout no books. Feller I work with, his sister’s husband’s uncle, is on the City Council. She says her husband said his uncle said he heard the liebarry buildin’s gots some vacant space in it. Story is them fruitcakes was gonna open up one of their hair saylons. They wanted our tax dollars to hep ‘em out.”

“I really don’t think that’s it,” I said, “but I heard the library will have to close without these tax funding dollars.”

“We don’t need no damn liebarry. Hell, I ain’t been in one since I was in the sixth grade, and look at me! You ask me we done kilt two birds with one stone. Gettin’ rid of them loop-de-loo tooty fruity lovers and that there money pit of a liebarry.”

A man in a clerical collar called to P.J. asking if he needed a beer.

“Hell yeah!” he hollered back. “Sorry, gotta go,” he apologized, “Man upstairs offers you a beer you take him up on that shit right now.”

I’ve always liked reading the Onion, and this is my attempt at an Onionesque story. My apologies to the 37% of Hudsonville voters still in their right minds. You can read the real story HERE.

We need to laugh more. We need more joy in our lives. We need an escape - every now and then - from reality. A reality that lately - it seems - sucks more than usual. Yes that's negative and I understand not every day of reality sucks - but I'm here for that ones that do. (Suck more than usual.) When I'm feeling espcially inspired I write long(er) form stories - that you'll find under STORIES. On this page I document my daily - or almost daily - observations of the world around us. You won't find political correctness here and you may run acorss more than the occasional naughty word. If you smile while you’re here I’ve done my job. If you chuckle now and then . . . well . . . that is, in my book, the mound of whipped cream on the Kentucky Bourbon Chocolate Pecan pie.